I think we all need a little organization when stitching a project.  Each time I start something new I look for the right floss storage as every project is unique.

The one I am working on right now is an upcoming reproduction so I'm stitching with silk which I always put in the convenient "Floss-A-Way" bags sold in needlework stores.  Usually I put them on a ring because each bag has a hole in the corner.  I don't remember why I tried it but I slipped one of the bags into the pocket in our "Fresh From the Garden" needlebook and it fit!  They are all in there now and it's keeping me very organized while I stitch. 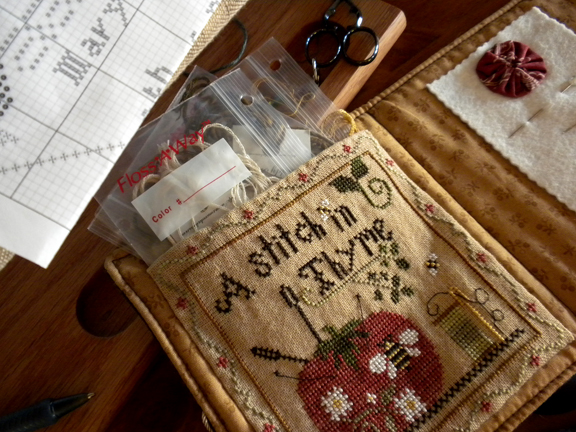 Back to stitching,
Diane
Posted by Diane Williams at 3:18 PM 15 comments:

Maybe some of you have heard the news already but I wanted to say a few words myself. . . . . . .the needlework magazine, "The Gift of Stitching" is going out of publication.  I had the privilege of being asked to contribute designs on two different occasions to this magazine.  It was, and is, a gorgeous publication.

I know Kirsten and the struggle she has endured publishing an e-magazine.  Each issue was very sought-after on the copyright infringing web sites.  I applaud her for fighting it as long as she did.

Have you ever heard that "sharing" a chart doesn't hurt anyone?  That needlework designers/publications can "afford" to lose the money via a few downloads?  Sharing does hurt and no, no one can afford the financial loss when it is multiplied so many times over.

I personally know stitchers who were once infringers.  Many people have recognized the harm they were doing and quit sharing and downloading.  However we have a long way to go if we're going to save this industry from a certain death.  Maybe it won't happen today or tomorrow but it will happen if all stitchers don't take responsibility and stop illegally sharing their charts.

I love designing but I too get discouraged when I see new charts downloaded hundreds of times.  To say I haven't thought of giving up would be a lie.  I'm sharing this to make a point. . . . . . . .many designers are on the verge of giving up the fight due to loss of income and respect for their hard work and I don't blame them.  Needlework is an industry like any other.  It takes money to keep it going.  Once the money is gone, so is the career and it's time to move on.

Thank you to every person who drove two hours to buy a chart, stitched it or stashed it and then bought another!  Thank you to those of you who gave away your original charts to friends rather than making copies for them.  And thank you for speaking up and telling your stitching friends NO when they asked for a copy of the chart you paid for with your hard earned money.  I am an optimist and I'd still like to believe we can turn this around and keep our designers and publications.

Thank you Kirsten for all you did for the industry by providing us with a beautiful, educational needlework publication.  You will be missed.

Email ThisBlogThis!Share to TwitterShare to FacebookShare to Pinterest
Labels: Copyright Infringement, The Gift of Stitching

These are not yet the dog days of summer but every afternoon Gracie plops herself in the warm Arizona sunshine.  This is a photo of her after she rolled around and around on her back.  She looks a little unkempt but that's what you get when you lay in dirt and grass.  :) 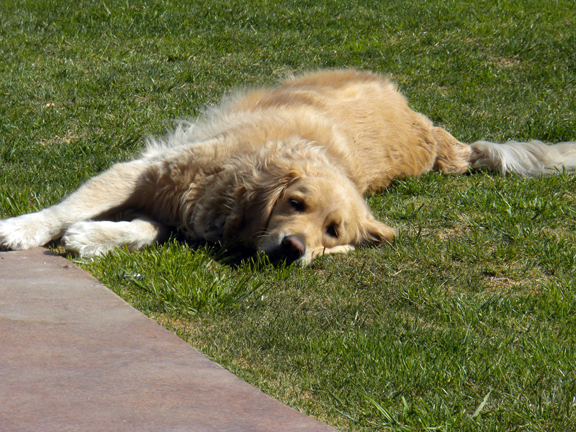 I know there are a lot of Adam and Eve lovers who can't seem to get enough of this cute little couple.  Adam looks a tiny bit like a girl.  We can't ask Elizabeth what she was thinking when she stitched him.  This chart is a repro/adaptation taken from the original Elizabeth Hancock sampler that came out in 2011.  You may remember that I didn't reproduce the entire piece.  This adorable section was located at the bottom/middle in her finished work. 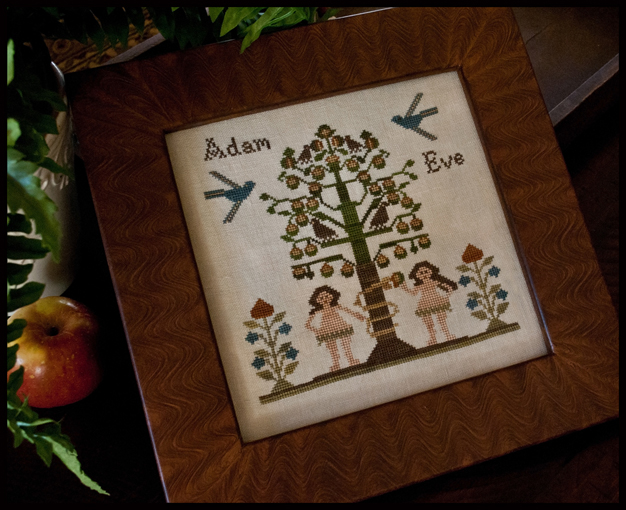 What you need to know about this design is that the words "Adam" and "Eve" were not on the sampler.  I added them myself.   The flowers were moved from another area, the birds were in the vicinity of the tree but not exactly where I put them, and I charted it for hand dyed cotton and not silk.  Stitch-for-stitch the tree, people and design elements are the way Elizabeth stitched them herself.

The frame is from Valley House Primitives and makes it look like an old sampler, don't you think???

I hope to get to the web site and update the supply lists for all three charts either tomorrow or Saturday.  Lots going on here so all I can say is I'll try!  We ship to our distributors tomorrow.

Happy Stitching,
Diane
Posted by Diane Williams at 11:58 AM 6 comments: 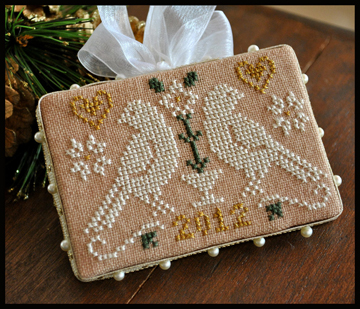 To finish it I used two pieces of foam core.  The one is wrapped with the stitched design and the back piece with a neutral fabric.  Glue the "sandwich" together and trim with a ribbon.  I dotted mine with long pearl pins and attached a fluffy bow on top.

Finally!  I am happy to say that we are shipping this reproduction to distributors the end of this week.  I feel like I've owned "her" forever! 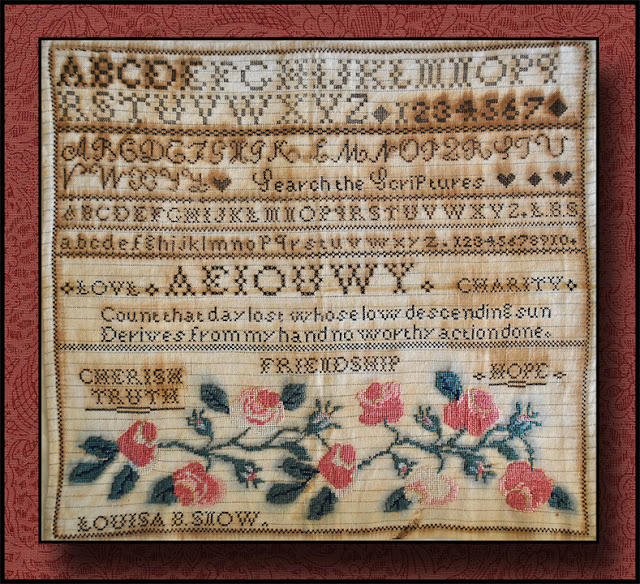 The sampler was reproduced stitch-for-stitch using the colors from the back side as the reference.  I have also included Louisa's genealogy for those of you who love such things as I do.

Happy Stitching,
Diane
Posted by Diane Williams at 10:27 AM 14 comments: