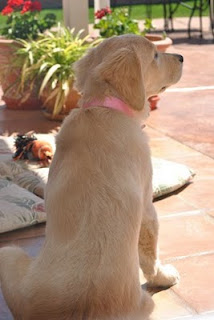 Some times it's just nice to sit on the patio, stare at the birds and just let the wind blow in your hair . . . . I mean fur!    She has quite a life, doesn't she?  The weather is gorgeous right now and Gracie is taking full advantage of it.
Posted by Diane Williams at 2:43 PM 9 comments:

When I was a little girl my brother and I would ride our bikes to the farm nearby to buy fresh eggs for mom. 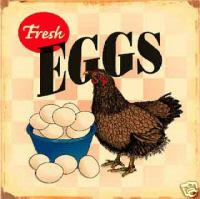 Just trivia!
Posted by Diane Williams at 7:35 AM 4 comments: 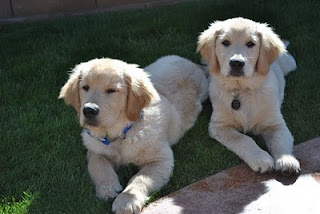 Gracie's brother, Luke came to play this weekend.  They do what they always do which is wear each other out.  I think they are just doll babies!  They do everything together and at the same time including resting
Posted by Diane Williams at 3:10 PM 9 comments: 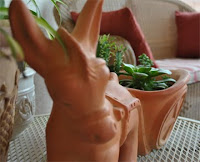 Last year Ron bought this adorable terra cotta burro.  He planted something in it that died almost instantly.  I think the potting area was just too shallow.  Anyway this year he has cactus and is quite proud of them.  Let's hope he doesn't overwater.  :) 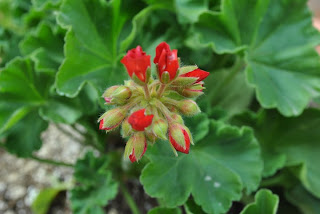 We also did some new landscaping that finished up this week.  It was fun to breathe warm air, dig some holes in the ground and add some color.  Geraniums are my favorite.  This plant will be full of blooms real soon! 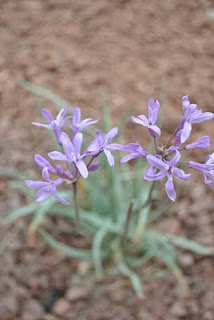 I don't remember the name of this little beauty and Gracie stole the tag right off of it.  It will remain a mystery unless someone fills me in!  The flowers are extremely delicate and a good wind sends the petals flying into the air. ~~~~~~~ 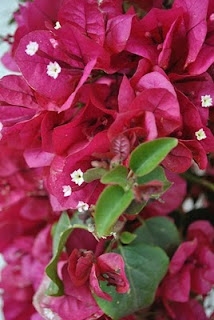 On the back wall of the house we planted a sun loving heat tolerant bougainvillea.  I LOVE this plant for the beautiful magenta brackets it grows.  I'm hoping it gets to be a huge plant!
And what would spring planting be without petunias?  Look at these blooms!  I just planted them a week ago and they are budding like crazy. 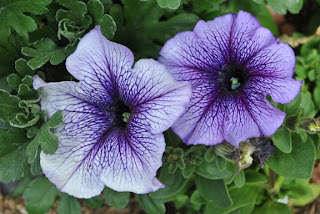 Hope you enjoyed the botanical photo tour.  Hopefully your spring is right around the corner!
Diane
Posted by Diane Williams at 2:31 PM 4 comments:

Gracie is losing baby teeth!  She's lost the top middle two and the bottom middle two.  She's also getting some big teeth in back so we are keeping a close eye on our furniture!  She does have a lot to chew on and hopefully we've taught her well in regard to what to chew and what not to chew!  I think this puppy is now over 30 pounds.  Puppy????  And yes, I'll tell Ron the grass needs to be mowed.  :) 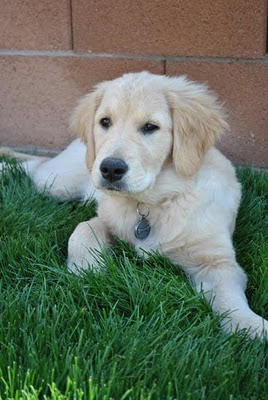 I just found out that I was given the wrong ordering number for the cardinal button in the new Winter Sheep ornament.  The number on the pattern is 1194.T and it should read 1113.T. They are both cardinals and the one will work as well as the other so it isn't a problem unless you want the exact one I used in which case you want a 1113.T.
Apologies from Just Another Button Company!!!!

I'm Irish!  My dad's mother was a very proud Irish woman whose family came from County Cork.  My ancestors have wonderful surnames such as Bresnahan, Twomey, McGillicuddy and Flynn.   In 2002 I completed what I could of the genealogy studies of one line of my Irish family who came to the U.S. during the mid-1800's.  The other side has proved to be a real stumbling block for me.  After they came to the US they resided in New York City and with a common surname like Flynn, it's as hard as tracing Ron's "Williams" family.

I love all things Irish and hope some day to see the Emerald Isle for myself.  :)

I received another email, this time stating that the spelling of "Marion" with the "o" is a variant spelling and perfectly acceptable.  So keep it an O or change to an A if you like.  I double checked and found the explanation on Wikipedia and agreed with the writer who notified me.  In fact, I believe Wikipedia is where I took my spelling from for her name in the first place!  However you still must take out one of the "r"'s in sheriff.  :)

Diane
Posted by Diane Williams at 6:39 AM 2 comments:

Gracie had a little water fun yesterday.  The temperature was above 70 which almost made you forget it wasn't officially spring.  When the sprinklers came on she tried to "eat" the water.  Well at least she isn't still eating the new grass!  She had so much fun and we enjoyed watching her antics. 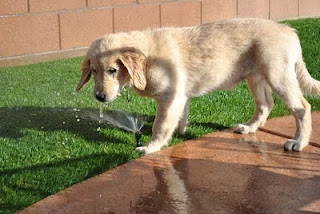 Here she is looking wet but adorable after a towel-dry. 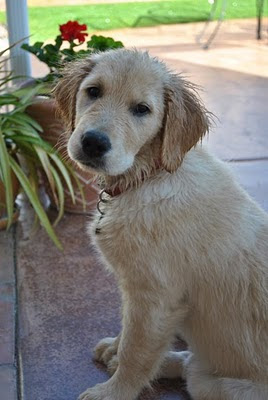 We've now had her in our home exactly half of her life!!
Posted by Diane Williams at 3:34 PM 9 comments:

Stitchers: Note: It appears that there are two mistakes in this chart that got past me, my mom and a few others. There is only one "r" is Sheriff. Remove one and stitch the remaining letters in that row. Also, Maid Marian is spelled with an "a" not an "o". Swap the one for the other and all will turn out fine. My model will forever have the mistakes but yours doesn't have to!
Posted by Diane Williams at 2:49 PM No comments:

I just updated my web site with the newest patterns.  The web site also has supply info. 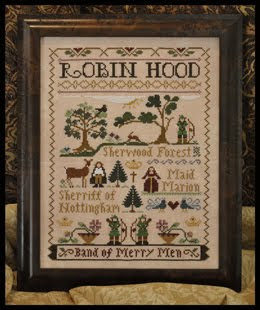 Here is the new Robin Hood design that I previewed.  I can see the people stitched on bookmarks also . . . . maybe stacked on top of one another like a miniature bell pull.  Don't ask where Friar Tuck is. . . . not only did I run out of room but I couldn't do the hair and his head in such a way that I like it. 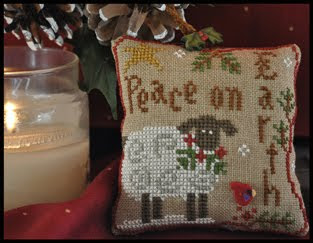 This is the photo I took that started the fire.  Right above the flame are pine cones.
The one on fire is cropped out of the image but it was red and smoldering!  So this is "Winter Sheep", the 5th ornament in the series.
Posted by Diane Williams at 8:02 AM 11 comments:

Anyone watch the show Friday night with Sarah Jessica Parker discovering who her ancestors were?  I loved it!  Being an amatuer genealogist for 25 years you can't help but get excited when anyone discovers their roots!  Well anyway, her search led back to Salem, Massachusettes where she found an ancestor who was there during the time period of the witch trials.  Her tension mounted as she waited for documents to show her which side of the story her ancestor was on.  Finally she was shown a paper that indicated her ancestor was accused of the crime of witchcraft but never punished and the jury was disbanded before the trial ever started.

Knowing I had Salem ancestors also I set about to see what I could locate and sure enough I found they were in Salem at the same time period.  All of a sudden I felt the same dread that Sarah did, wondering were they accusers, the accused or a part of the town folk that stood on a side of the hysteria. . . . . . . but which side?  It didn't take long to locate them and to my relief, found they stood against the accusers and beside the accused.  In fact, my ancestors signed a petition testifying to the good character of Renecca Nurse, one of the most notable of those accused and hanged.  So finally after all the years of knowing I had ancestors in Salem, I now can feel good knowing that they were not a part of what propelled the tragedies in that place and time.  Actually I found lists of "accusers" and they were never mentioned among them.

So yes, when I'm not designing or stitching, I'm usually "digging up bones" as I've long called it.  Some of my designs reflect my love of history and family genealogy.  Mayflower Landing celebrates my Mayflower ancestors and Coming to America was designed to celebrate my Irish ancestors.  I wonder what I'll do with Salem. . . . . . . . I wonder. . . . . . . . . .

Do any of you have a firm connection to Salem during this period in time?  Do you know who your ancestors were?  Let me know!
Posted by Diane Williams at 6:34 AM 10 comments:

Gracie is growing up! 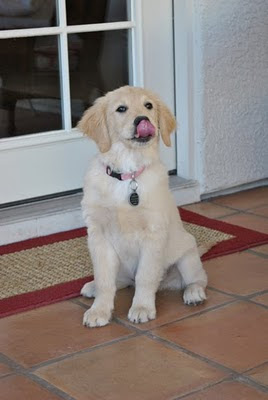 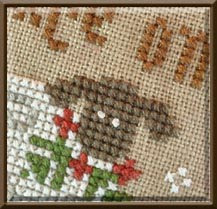 I hope so. . . . . . . the next ornament to ship features one big curly sheep and a wonderful message for the holidays.  This patterns ships to distributors along with Robin Hood in the middle of the month.
The "Winter Sheep" supply list is on the LHN web site now!
Posted by Diane Williams at 1:14 PM 7 comments:

Christina Wilson has started an LHN Facebook page and one for CCN is on the way!  You can follow it here: Facebook   Christina is also the friend/stitcher that started the YUKU group for those that prefer that type of message delivery.  Thank you Christina!
Posted by Diane Williams at 8:08 AM 2 comments: