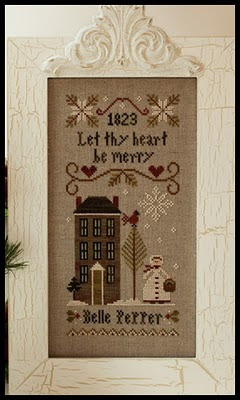 I mentioned a while ago that Theresa Venette invited me to create a "Jenny Bean and Friends" pattern that would release this fall along with other designer's "friends" patterns.  I immediately thought of the name "Belle Pepper" as Jenny's friend.  Everyone has come up with their own name, pattern, etc. and I have to say it has been a lot of fun.

This chart will not ship until mid-September but I saw other charts going up on the internet so I wanted to get this one up too.  It's called "Be Merry - Belle Pepper".  I have included an optional word for the bottom of the chart if you wish to keep Belle's name off.

I hope you like this pattern as much as I do!
Posted by Diane Williams at 4:20 PM